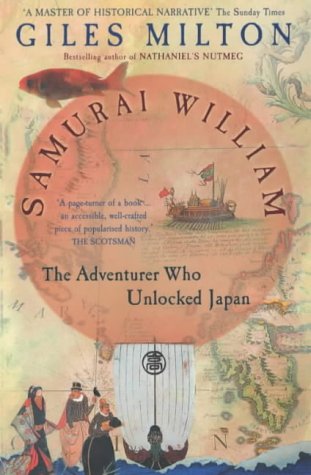 Amazon Review
Samurai William tells how, in 1598, William Adams, an English seaman of humble origin, sailed out of Rotterdam on a Danish ship en route to the East Indies. After 20 months at sea in which they survived a series of disasters, starvation and disease, Adams and a few remaining sailors floated into a harbour on the island of Kyushu in southwestern Japan. Though not the first Westerner to reach Japan--Portuguese traders and Jesuit monks from Spain had arrived about 60 years earlier--Adams was the first Englishman to arrive. The impact this one man would have on future relations between East and West is the subject of this engrossing book.

After landing, Adams spent some time in prison and was nearly executed before he made an unlikely ally in Tokugawa Ieyasu, a powerful feudal lord who would later become shogun of Japan. Intrigued by the outside world and impressed with the sailor's navigational abilities, Ieyasu commissioned Adams to oversee the construction of some ships to be used for both trade and exploration. In time, Adams mastered the language and complex social customs of Japan, began teaching the shogun about geometry and mathematics and served as a translator and political counsellor to Ieyasu. For his service, he was awarded great wealth, land holdings and even a lordship, making him the first foreigner ever to be honoured as a samurai. When news of his high standing reached England, a small crew of Englishmen were sent to Japan to use Adams's political connections to open trade between the two countries.

Giles Milton, author of Nathaniel's Nutmeg does a masterful job of covering Adams's remarkable life. His narrative moves along briskly as he recounts harrowing sea adventures, fascinating details about Japanese culture and the attempts of various countries, including Holland, Portugal, Spain and England, to gain a foothold in Japan to exploit the rich trade possibilities. Samurai William is an impressive achievement and a thoroughly entertaining read. --Shawn Carkonen, Amazon.com

Anyone who enjoyed Shogun ... will love this (Lancashire Evening Post)

A page-turner of a book... an accessible, well-crafted piece of popularised history. (Allan Spence, The Scotsman)

Giles Milton has once again shown himself to be a master of historical narrative... a gripping tale of Jacobean derring-do, a fizzing, real-life, Boys' Own adventure underpinned by genuine scholarship. (Katie Hickman, The Sunday Times)

Milton has brought the era to life, conveying nuances of character and the values of the time. (The Sunday Times)

The thoroughness and intelligence of his research underpins the lively confidence with which he deploys it. (The Times Literary Supplement)

Fascinating detail . . . Milton is good at portraying eccentric characters and the Englishmen's shock at the periodic brutality of the Japanese. (The Times Literary Supplement)

Giles Milton is a writer and historian. He is the bestselling author of Nathaniel's Nutmeg, Big Chief Elizabeth, The Riddle and the Knight, White Gold, Samurai William, Paradise Lost and, most recently, Wolfram. He has also written two novels and two children's books, one of them illustrated by his wife Alexandra. He lives in South London.