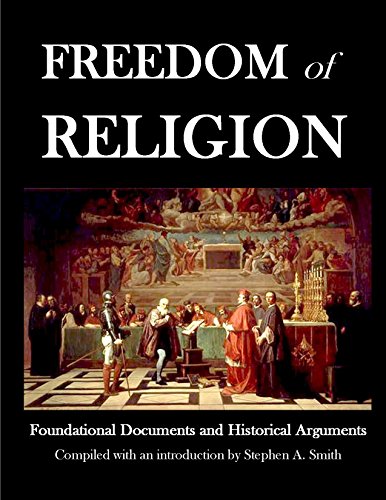 This comprehensive anthology comprises a provoking, stimulating, and seminal collection of 300 important writings on religious liberty. Drawing on the foundational arguments, debates, and laws, it is easier now to gain knowledge on the subject of religious freedom, engage in the ongoing debates surrounding it, and shape future thought on the subject.
Why is it important for individuals to search for their own religious truths? What are the arguments for and against government restrictions on a person's personally-held religious beliefs and practices? To what extent can or should government support religion? What are the foundational documents on the subject, who wrote them, and what do they say? Why is religious liberty important?
Never before has such a collection been available that addresses these questions and more, and Smith's innovative contribution does so by providing the important historical grounding and philosophical positions that guide readers through these significant selections. This book provides a wealth of information from the past in one volume that will remain a significant anthology in future discussions of freedom of religion, whether for education or advocacy, in the classroom or the public sphere.
This outstanding collection should be in every public and college library and on the desk of every person seeking to understand or shape public policies affecting religious liberty.

"Throughout history, perhaps no subject has been more fiercely debated than the subject of religion. Moreover, the rights of individuals to hold, express, or practice the dictates of their consciences has been the fodder for wars, rebellions, excommunication, death penalties, and sanctions for most of recorded history. In this masterful collection of original documents, Stephen Smith guides us through the primary texts of authors whose claims advanced the radical notion that freedom of religion is indeed an important human right. No other collection is this complete. Moreover, it provides information from leading thinkers so as to enable the readers to draw their own conclusions as they simultaneously investigate the topic's complexities. Anyone interested in freedom of religion should have this book on their desk."-- Professor Rita Kirk, Director, Maguire Center for Ethics & Public Responsibility, Southern Methodist University

"Stephen A. Smith's collection of writings on freedom of religion is a unique contribution to America's search for wisdom regarding the proper relationship between religious belief and government policy. History does matter and Smith's extensive compilation of thinking from the Torah to the Scopes Trial elucidates how long this great argument and discourse has been going on in the United States and throughout the world. It is a brilliant and much needed antidote for those suffering from the mistaken belief that controversy over 'church/state separation' is a recent phenomenon. His explanations of the context of documents are themselves lucid analyses that put all the documents into a meaningful perspective."-- Barry Lynn, Executive Director Emeritus, Americans United for Separation of Church and State